Scroll Synchronization in WPF and Silverlight

Imagine you have two ListBoxes with lots of items. Whenever a user scrolls in one of the two ListBoxes, the other one should be updated, too. What we want to do in this article is to create a simple attached property, that allows us to group scrollable controls. In the following sample you see two ScrollViewers, whose scroll positions are synchronized because they are both attached to the same ScrollGroup "Group1":

As most scrollable controls use the ScrollViewer in their template to enable scrolling, this should also work for other controls like ListBoxes of TreeViews, as long as they contain a ScrollViewer  in their  ControlTemplate .

Here you can see the Silverlight version of my synchronized ListBoxes:

In the following article I will show, how to build the ScrollSyncronizer class in WPF to synchronize the scroll position of various scrollable controls. In the source code download you will find a working solution for WPF and Silverlight.

In the property metadata of the new property there is a callback that is invoked everytime aScrollViewer uses the attached property, so this is the place where we will provide the logic to synchronize the ScrollViewer with all other attached ScrollViewers. But before we need some private fields to store all attached ScrollViewers as well as their corresponding horizontal and vertical offsets. The string part in these dictionaries is equal to the name of the group that is set by the ScrollGroup property.

Now our last task is to implement the event handler for the ScrollChanged event. If the horizontal or the vertical scrollposition has changed, we update the dictionariesverticalScrollOffsets and horizontalScrollOffsets to the latest position. Then we have to find all ScrollViewers that are in the same group as the changed ScrollViewer and update its scroll positions.

To test the new attached property we build a simple UI with two ScrollViewers. For both ScrollViewers we assign the value "Group1" to the ScrollGroup property.

In the code-behind file we add some TextBlocks to both panels, so that the ScrollBars will get visible.

Done! We have two synchronized ScrollViewers: 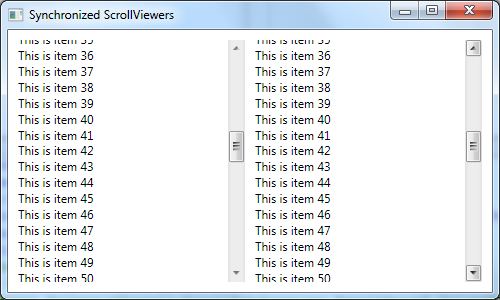 A nicer way to do this would be to set the style in the Grid  resources, so it applies to all ScrollViewers in the grid automatically. 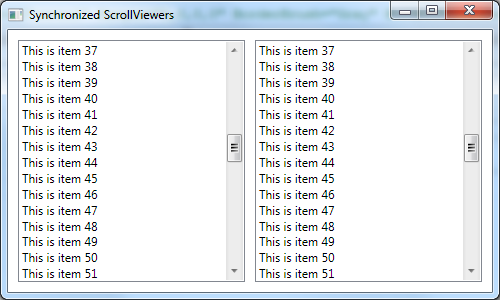 Basically this solution would also work for Silverlight. In detail there are some differences like a ScrollViewer does not provide the ScrollChanged event in Silverlight. But you can bypass this problem by using the Scroll and ValueChanged events of the underlying ScrollBars. Another problem is that the Style for the ScrollViewer is not applied in the ListBox sample, even when using the ImplicitStyleManager. So I ended up setting the attached property in code for Silverlight. In the source code download you will find a working solution for WPF and Silverlight.

This year at dotnet Cologne I have proposed a 60 minutes live-coding talk about async/await. It was really accepted and I even got the large ballroom. Wow, live coding in front more than 100 developers. This will be awesome. In this blog I post the sample that I am going to develop on stage.

At BASTA Austria 2012 I did a workshop about parallel and async programming in C#. In this blog article you find the material (slides)